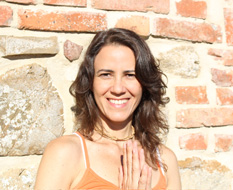 Chaitanya Mayi is Bachelor of Arts (2000) by The School for New Dance Development, a department of The School of Arts of Amsterdam, The Netherlands and She is a certified Yoga Teacher (2005) by Yoga Alliance Brazil and CSEN-Italy.

She first got in touch with the practice of yoga on her Pilates classes and found its techniques very effective for endurance of the respiratory system and control of the mind during her performances.

It wasn’t long until she found out the wholesome benefits of this ancient science and dove deeper into the studies of yoga.  Enlivened by the awareness of her limitations and potentialities, she began a quest for her spiritual identity.

She is initiated into Zen Buddhism and later, into Kriya Yoga, whose practices were based in emptying the mind through meditation. On the field of Hatha Yoga, she studied Ashtanga Yoga, Iyengar Yoga and Power Yoga, being soon appointed by her teacher to take her own students.

In 2002, she holds a 5 month trip through Asia and it is then that her spiritual quest earns true meaning and fulfillment. In India, Chaitanya Mayi is blessed by encountering her spiritual master, His Divine Grace Srila Bhakti Sundar Govinda Maharaj, Sevaite President-Acharya of Sri Chaitanya Sarasvat Math. Under the guidance of such self-realized saint, she engages in the practices of Bhakti Yoga and devotional service.

She continues her pilgrimage to holy cities of India, living in ashrams and offering voluntary service.  In Rishikesh, at the foot of the Himalayas and the banks of the River Ganges she studies Iyengar Yoga at the Institute Omkarananda Ganga Sadam.

Back to Brazil, her home land, she teaches dance at the University of Arts Dulcina de Moraes for a two year Dance graduation; and drama for 1st to 6th graders at The International School of the Nations in Brasilia, D.F. In 2003, she takes a step forward and opens the Atma Yoga Centre focusing her full energy in the research and teachings of Yoga. She successfully runs this yoga centre for nearly seven years.

At Atma, apart from regular yoga classes, several workshopswere held on the various styles of yoga such as Sivananda Yoga, Ashtanga Yoga, Integral Yoga, Bikram Yoga, Meditation and Ayurveda. Classes on the sacred scriptures of India such as Srimad Bhagavad Gita and Srimad Bhagavatam as well as Vaishnava festivals also took place.

Hoping to offer some service at the lotus feet of her beloved Gurudev who was showing desire to leave this world, in 2009 she sells the Atma Yoga Centre and moves to India. In March, 2010, His Holiness Srila B.S. Govinda Maharaj enters samadhi. Feeling His presence in her heart she stays in India as a resident devotee of Sri Chaitanya Saraswat Math, the ashram where her master manifested His pastimes.

Her deepest desire is to be able to share with others, through yoga, the loving teachings of her divine master who is the personification of mercy and sweetness in this material world.  sistema e penetrare gli strati dell’aura, ristagna, creando delle situazioni di disagio psico-fisico negli individui.